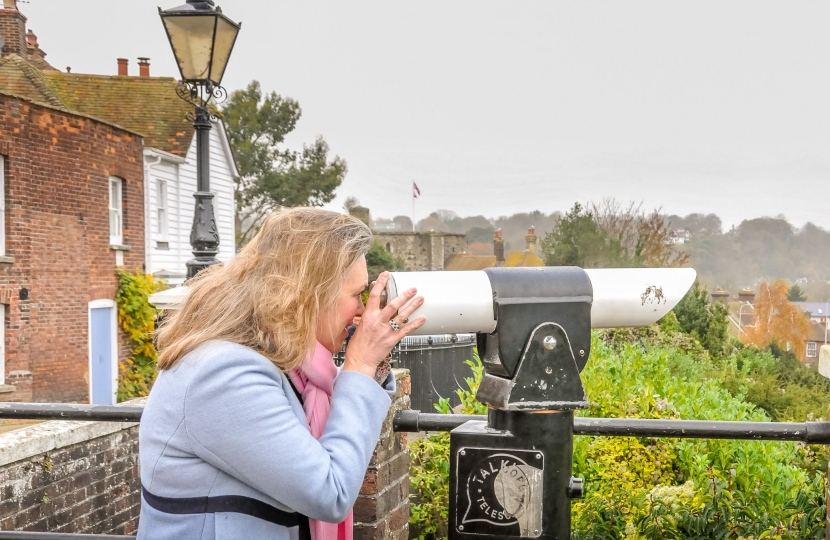 Looking back over the past year, it is hard not to focus on the negative stories we read in the national press – at times, it seems, on an almost daily basis. For me, like many constituents, it has been frustrating because we have actually achieved some fantastic things in 2021, despite COVID-19. These include our world leading Environment Act, rescuing thousands of people from Afghanistan, our New Plan for Immigration and the Nationality and Borders Bill (due to be given Royal Assent), the fantastic Holiday Activity and Food Programme which has benefited children and their families across Hastings and Rye, the recruitment of more police officers, a National Skills Fund and the Lifetime Skills Guarantee.

I think one of the things we can be most proud of as a nation and here locally is the vaccination programme. The U.K. was the first country in the world to deploy an approved COVID-19 vaccine. Rother Primary Care Network established a vaccination site in Etchingham, followed by a pharmacy led site at Tilling Green Community Centre. Our local vaccination programme across East Sussex has been a tremendous success with over 84% of eligible people receiving their first dose and more than 78% receiving their second. Nationally, almost 120 million doses have been administered. This has not only saved countless lives, but also reduced the pressure on our NHS. The booster programme has accelerated and, as of the 31st December, everyone eligible for a booster has been offered one. By 17th December, 71.4% of eligible residents in Rother had been given their booster vaccines and a huge thank you needs to go to everyone who has helped deliver this.

The lifting of restrictions in the summer was met with much criticism, but it proved the right thing to do. The Prime Minister held his nerve and we found ourselves and our economy bouncing back with  renewed vigour. The U.K. was the fastest growing economy in the G7, with almost 6% growth in the first three quarters of 2021. It was great to see our local businesses bouncing back, especially due to the increase in visitors we enjoyed over the later summer months.

I am really delighted that during 2021 we got more people into work than ever before with the Government’s Plan for Jobs, including the Kickstart scheme aimed at younger adults under 25. This has proved very successful locally and, having spoken to a number of businesses, I managed to persuade the powers that be in the DWP (and the Treasury) to extend the scheme until the end of March 2022. Locally, earnings and employment have increased, as have the number of new businesses.

Apart from the boost in wages and the increase in the National Living Wage, I have also welcomed the tax cutting for low-income families - helping working families meet the cost of living. I felt it was difficult to take the £20 uplift away from Universal Credit claimants and voiced my concerns directly with the Chancellor. I therefore welcomed the reduction in the Universal Credit taper rate from 63 per cent to 55 per cent, effectively giving a £1,000 pay rise to 2 million of the lowest paid. Universal Credit has been one of the major successes of the pandemic – an in-work benefit which ensures that work pays.

We cannot ignore the Government’s record investment in the NHS over the past year, nor the delivery of the biggest catch-up programme in the NHS’s history, so that everyone can get the care they need and deserve. Over the next three years, the Government will invest an extra £36 billion in funding for health and social care, delivering around nine million more checks, scans, and procedures. Huw Merriman, MP for Bexhill and Battle, and I work closely together on many issues as we share Rother District, and I am delighted that we have been successful in securing a diagnostics centre locally (to be based in Bexhill) and a new mental health hospital to be built in north-east Bexhill (in the area earmarked for development off the link road), benefitting both our constituencies and East Sussex as a whole.

I was tipped into politics because of the deprivation and disadvantage and lack of aspiration and hope that I witnessed too often in my role as a magistrate in Hastings and Rye. It was clear to me that getting children and families right, reducing poverty and disadvantage, ensuring a level playing field when it comes to accessing opportunities, better education, better access to skills and better paid employment are fundamental issues locally.

This is why I am committed to ‘levelling up’ because the beautiful coastal communities of Hastings and Rye have so much more potential to unleash if they are given the opportunity to do so. I know that we have a fantastic contribution to make, as individuals and businesses, as there is huge potential for growth in the cultural, tourism and manufacturing industries, for example. Levelling up means that everyone gets equal opportunity to unleash their potential. This will help combat poverty, which deprives our local community and economy of the skills and talents of those who have meaningful contributions to make. Investment in people, in families, in education and skills, and in jobs – as well as investment in better transport connectivity – are all vital in combating poverty and levelling up and are areas that I will continue to focus on in 2022.