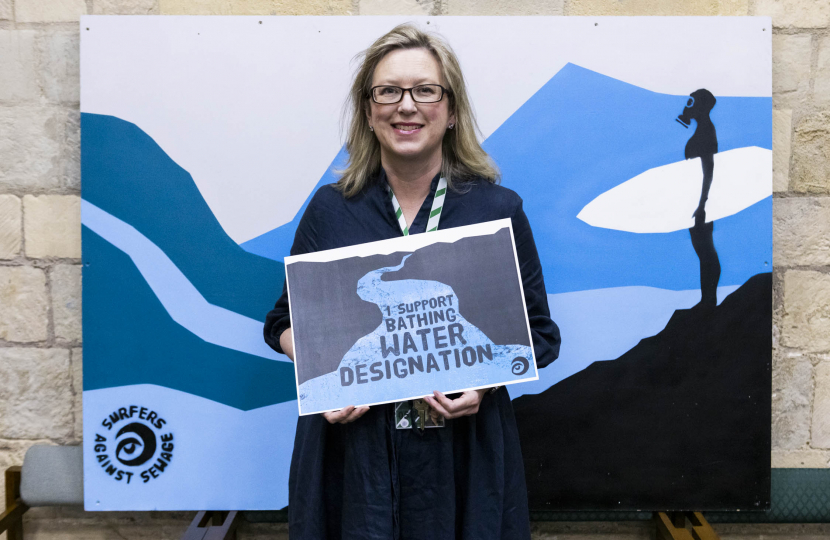 Today [5 July 2022] Sally-Ann attended an event in Parliament hosted by Surfers Against Sewage to show her support for their campaign to reduce sewage pollution and increase the number of designated bathing water areas.

Given the importance of the issue to local residents, reducing sewage pollution is an area that Sally-Ann has taken an active interest, including through raising the concerns of her constituents with Government Ministers ahead of the Environment Act 2021 being passed into law. This Act enshrines better protections into law, providing the Government with powers to set new binding environmental targets, and this event was an opportunity for Sally-Ann and other MPs to help ensure reducing sewage pollution remains at the top of the political agenda.

During the event, the on-going issues related to inland bathing water quality were discussed in detail, as were potential solutions with the primary one suggested being to increase the number of sites designated for bathing. Official designation of such sites has been instrumental in improving coastal water quality over the last three decades and, since coastal bathing waters were introduced, the percentage of beaches meeting minimum water quality standards rose from 27% to 89%.

Bathing Water Designation is achieved by applying to a government agency and, historically, local authorities have taken the lead on this. However, existing designations have also been achieved by communities campaigning and applying for it too.

Commenting on the event, Sally-Ann said:

“I know from speaking to residents across Hastings and Rye how important reducing sewage pollution is to many people locally, and I was pleased to join Surfers Against Sewage at their recent event in Parliament to show my support for their on-going campaign.

Last year’s Environment Act was a big step in the right direction, empowering Government Ministers to better hold water companies to account, but I know more work needs to be done to ensure bathing waters – both coastal and inland – are better protected for the enjoyment of all.”